After sharp declines in equity funding in education and a 66% drop in mergers and acquisitions during 2022, the year ahead is expected to bring further consolidation and see more listed education groups go private.

Viggo has previously worked in teaching in Germany and Turkey, until his change of career in 2017. He returned to the UK and completed a diploma with PA Training in London. In his free time he is normally watching a film or tv, or riding his bike, or reading… generally things that involve sitting. Get in touch with Viggo on viggo@thepienews.com.

According to analysis by strategic consultancy and corporate finance group Schoolhouse, long-awaited deals – such as rumoured transactions from GUS, GEMS, CEG, SPAC acquisition of BYJU’s, Advent sale of Learning Lab, KV Asia sale of APU – did not materialise in the past year.

Others such as Apollo’s US$8.5 billion bid for Pearson, the selldown of Vietnam’s largest private education group Nguyen Hoang, were announced but later withdrawn.

According to Schoolhouse managing director Edward Slade and chairman Mark Skinner, some deals late in 2022, such as SIS and Learning Lab, could spill over into Q1 2023.

“However, some vendors are sticking on price. Many education businesses are great cashflow producers, and so unless vendors have pressing financial needs, they may hold out for higher valuations even when valuations in other sectors have declined due to rising interest rates and higher volatility,” they said. “Bargain hunters may be disappointed.”

The analysis suggested that more listed education groups will go private “as volatility and transparency impact management focus” and that M&A volumes will bounce back in 2023. 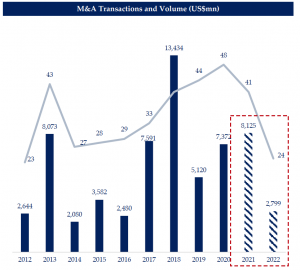 The consultancy tracked 163 listed companies across the education sector with a combined valuation of $119bn, and found that the value stock shares are down -17% vs 2022.

“Although there have been new entrants such as Taaleem ($713 million market cap), the major influence was the exit of American Campus Communities ($11bn market cap). Expectations for major new listings by India’s edtech companies have not come to fruition,” the report noted.

“Edtech valuations have declined, with companies such as Coursera –50% for the year.”

“We doubt that the IPO market could be worse than 2022”

An absence of IPOs was a result of market volatility and declining growth premiums, while “much-anticipated offerings” such as Taaleem – which raised $204m in November – “disappointed investors with a weak aftermarket”.

“The largest IPO of the year, expected to be BYJU’s, did not eventuate due to declining Tech valuations and uncertainty around the company’s accounts following a breakneck speed of growth and M&A in 2019/20,” the paper said.

In 2022, investors marked the Indian edtech giant down from $22bn to $6bn. If profitability improves, BYJU’s might consider a Q4 deal, according to Schoolhouse.

“Equity market volatility is very challenging for IPOs, but we doubt that the IPO market could be worse than 2022,” Slade and Skinner said.

“We can see IPOs resuming in the second half of the year as interest rate rises slow. Although Taaleem’s IPO has not traded too well (-14% currently) it was popular at 18x subscribed, so we do see significant pent-up demand for good quality education companies…

“We are aware of a number of companies looking at the equity market.”

The report added that tertiary and vocational education remains the largest sector, and, despite a valuation collapse in 2021 as a result of China’s “double reduction” regulations, tutoring has “recovered significantly”.

Leading companies in China, New Oriental and TAL, saw their shares outperform over 2022, and while after-school tutoring remains formally banned in the country, international test prep and study abroad are legal and will resume, the document said.

“Both companies have looked to diversify with New Oriental’s Koolearn focusing on online media, while TAL is rumoured to be expanding outside of China,” it noted.

Schoolhouse pointed to IDP – with its new CEO – as having “a great market opportunity in a highly fragmented sector”, while a “sharp rebound” anticipated for Chinese student volumes will benefit the business.

The report suggested that China will see domestic student volumes rise due to high youth unemployment, while outbound volumes will “surge” on pent-up demand as the country abandons its zero-Covid policy. However, it warned that English-language testing has not yet fully returned, which could hamper recovery.

Schoolhouse also predicted that online groups will “merge with offline players to offer hybrid solutions”, and expects an increase in the number of online to on-campus degree programs offered.

The $12.8bn acquisition of American Campus Communities by Blackstone in August 2022 (the real estate investor also acquired UK-based iQ portfolio in 2020 for £4.7 billion in 2020), is indicative of interest in student accommodation remaining strong.

Interest in education REIT sector also shows strength despite Unite Group’s stock returning “an underwhelming -18%”, as a result of rising interest rates, with other players such as Arena and Charter Hall Social Infrastructure showing similar returns, the document said.

“PBSA occupancies are back to pre-pandemic levels and room rates are rising,” it added.

In the year ahead, Schoolhouse called for more assistance for learners in Ukraine and Afghanistan.

FutureLearn has already announced free access to its premium digital learning platform to Afghan women for the duration of the Taliban’s ban on their participation in higher education.

“We would be delighted if digital content providers could work to make their learning materials available for free in Dari and in Ukrainian,” Slade and Skinner said.

“Most of the macro shocks of the past year were events extrinsic to our sector. Higher inflation, higher interest rates, war in the Ukraine, travel and visa roadblocks – none of these are problems that are fundamental to the education sector,” they added.

“Parents still want the best education for their children. The desire to learn at the best possible college with the best possible employment outcomes remains. The optimism around some aspects of online learning may have tempered, but after a year of adjustments to forecasts, a new realism will form a basis for new deals in the sector.”