Getting ready for Special Education school? Parents share 8 tried-and-tested tips to prep your child for a good start

Transitions can be a challenge for any child, let alone those with special needs. There are new routines, new faces, new sounds and smells to get used to. You can ease your child into the first year of SPED school with these parenting tips.

If your child is entering a Special Education (SPED) school soon, you may have questions on your mind on how to prepare them for this new chapter.

What are some new routines they should get used to? Will they get used to taking the school bus? How can I work with the teacher to manage any meltdowns?

These are valid concerns, say parents we spoke to whose children are in SPED schools. Here, they share useful tips and strategies to make the first year at school a good one for your child.

Tip #1: Use visuals and social stories to introduce new experiences

It is important to prep your child for the new experiences ahead, to help them to grow familiar with the scenes they will soon encounter. This could open up opportunities to discuss their feelings towards the impending changes to their routines.

Parents could look for books of social scenarios, called social stories, that illustrate a social situation and help a child learn ways of behaving in that situation. Or they could share photos and videos of the child’s school life ahead.

Before her son Jaeden started school at AWWA School @ Bedok, which serves students with autism spectrum disorder (ASD), Ms Kristine Abegail Ng showed him photos and videos of what the school looks like and the school uniform he would be wearing. She believes this helped to create interest in his new environment and ease his transition from preschool and early intervention classes to Primary 1. Other parents may show pictures and social stories of typical school situations such as taking the bus, entering the school compound, or taking a snack break in class. Tip #2: Speak with the school about your child and your concerns

After enrolment, parent Angela Yeo Xue Ting, mother of Zavier Leong Jia Jun, aged 7, had rich conversations with the Principal and staff of Canossian School, a SPED school that caters to students with hearing loss.

She shared about his strengths, interests and areas of difficulties. She noticed that spelling would be new to him and a potential area of challenge. His teacher taught her strategies to help and to date, to Ms Yeo’s delight, Zavier has been aceing his Spelling tests.

The P1 orientation or the Parent Teacher Meeting at the start of the year is a good platform for parents to connect with your child’s teachers and share more about your child with them, as well as any areas of concern you have.

A strong partnership between parents and teachers is critical for your child’s smooth transition to a SPED school. Sharing information about your child, such as what the more effective ways are to manage their meltdowns, helps the school to better understand their needs, and to put in place strategies or support to meet those needs.

For Zavier’s parents, for example, conversations with the school made them realise the importance of enforcing the discipline of him wearing his hearing aids even when at home – this helps create the language-rich environment that children with hearing loss need to acquire language proficiency. 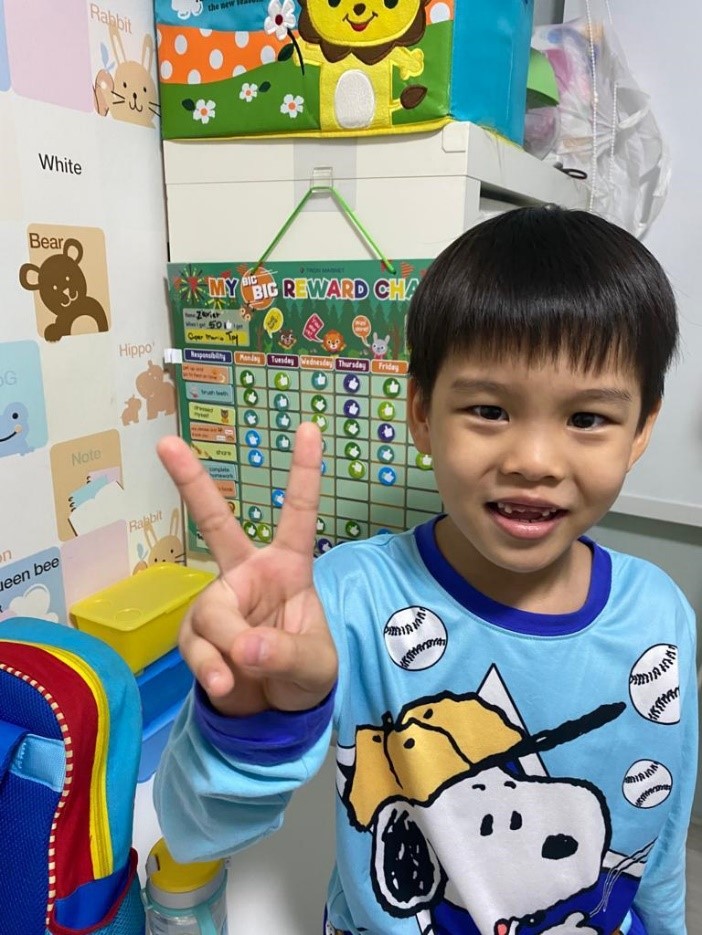 Zavier and his rewards chart, with stickers he earned for his persistence in completing tasks in school and at home.

Primary school is a step of independence for many children, where they may be doing some things for themselves for the very first time.

Ahead of the new term, Madam Rabiah Bee Binte Ramzan Ali started practising with her daughter Tiara Khalisha Binte Muhammad Faizal to feed herself and pack her schoolbag.

Other daily living skills that a Primary 1 or Junior 1 student entering a SPED school may require include knowing how to use items such as their water bottle or lunchbox, toileting, washing their hands, and putting on their uniform and shoes.

While not every child may be able to perform these tasks independently due to their physical conditions, those who are able to, should get some practice as part of navigating through a school day.

For Tiara, the initial few weeks was challenging as she needed to get used to using cutlery and mealtimes were a messy affair. But the eight-year-old, who is now a student at Metta School, which serves children with mild intellectual disability and ASD, is able to eat on her own at school. Tiara learned to eat without help as part of gaining independence and getting ready for school.

Over at St. Andrew’s Mission School (SAMS), a SPED school offering the National Curriculum to students with ASD, Mr Kyaw Moe Hlaing, the father of nine-year-old Kaung Myat Kyaw, prepared his son for Primary 1 by teaching him how to put on his socks and shoes, replace his face cloth, and put on and take off his unform, among other self-care and daily living skills. After much practice, Kaung is now able to independently perform these tasks, much to the delight of his family and his teachers. Kaung got ready for Primary 1 by learning to put on shoes himself and use a checklist (below) to make sure he packs everything he needs for school. 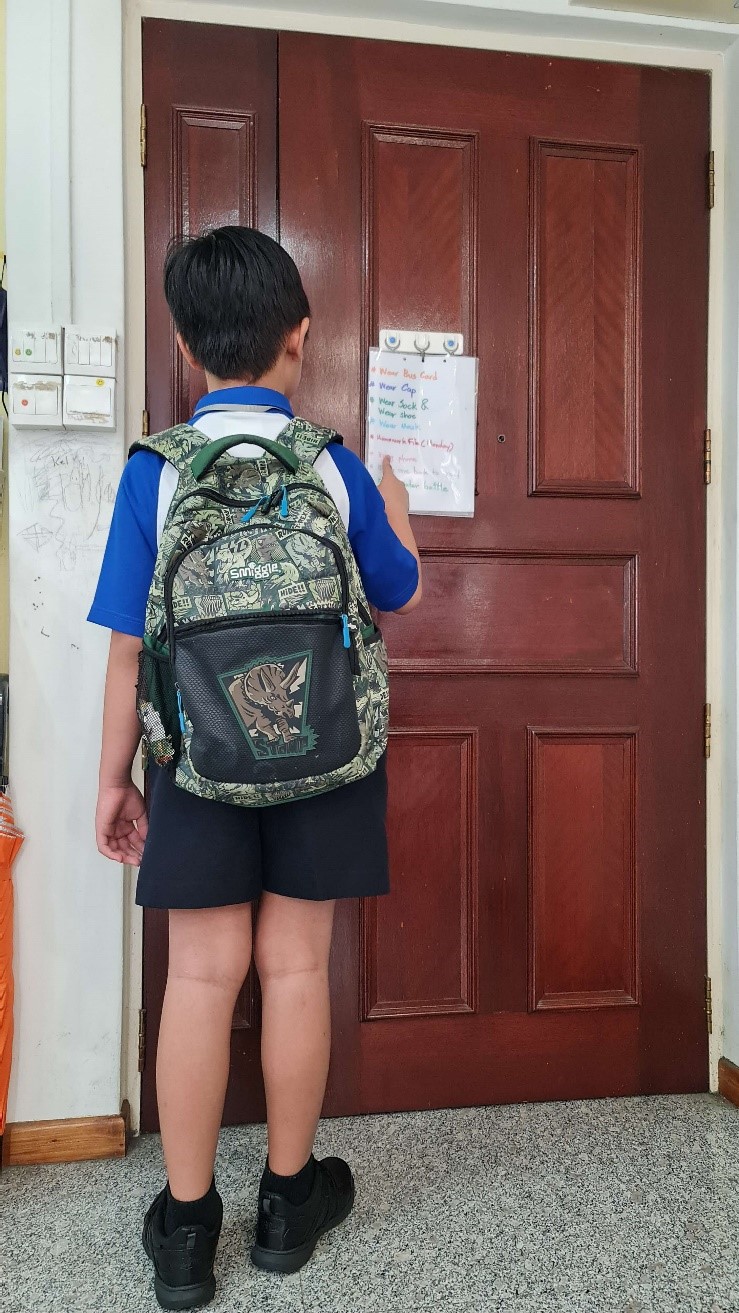 Sharing, turn-taking and having good manners are among the key skills that children need to have for healthy interactions with their new classmates and teachers. Parents can teach their children these skills by modelling and role-playing them with them and their siblings in a range of settings.

In the home, for examp
le, Kaung’s parents teach him the importance of sharing his toys with others during play, and waiting for his turn during games. They also constantly remind him that having fun with others is more important than winning at a game. 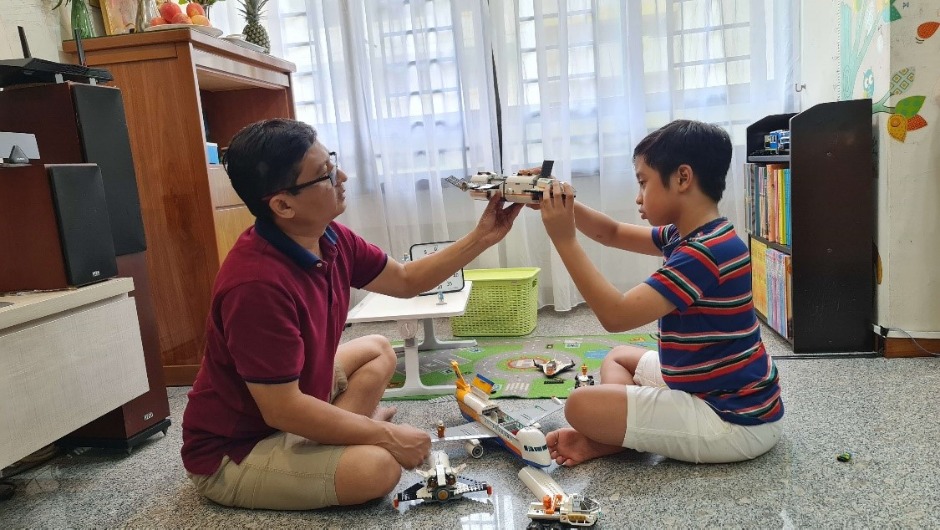 Kaung learning to take turns while engaging in play with Mr Moe.

For Tiara’s mother, even though her daughter has struggles with communication, she persists in teaching her social rules such as waiting for her turn to speak and not interrupting the person who is talking. Subsequently, Tiara has learnt in class that she needs to raise her hands if she needs the teacher’s attention or wishes to say something.

Tip #5: Build up their ability to focus and concentrate

Being able to focus and concentrate in a classroom setting is a valuable skill for any student – it facilitates learning in a group setting, and students will also enjoy school more.

Zavier’s parents learned through his therapy sessions that he liked paper-cutting activities, and encouraged him to work on this to build up his ability to focus on the task before him; for Kaung, it was building with LEGO blocks. Zavier likes paper-cutting activities, which help to build up his focus too. Tip #6: Help to develop their ability to regulate their emotions and behaviour

Emotion regulation allows a child to control and adapt his or her behaviour in spite of a situation that triggers a negative feeling such as anxiety, fear, frustration or anger. Helping children to learn about their emotion level and triggers allows adults to talk more easily about these situations with their children.

Social stories are especially useful in helping children learn strategies to deal with their emotions, in particular, for calming down and for handling frustration and anger.

For Kaung and his mother Ms Zin Zin, it was the use of a flipbook on feelings which helped Kaung to identify his emotions as well as acquire the vocabulary to express them. His parents’ diligent use of the flipbook each time he experienced different emotions, whether positive or negative, helped him to be familiar with them and learn how to calm himself down when he was anxious or angry. Kaung using the “I Know What To Do When I’m Feeling” flipbook with his mother.

For many pre-schoolers entering a SPED school, it takes time for them to get used to the new school hours. For one, students attending the afternoon sessions may have to get used to not having an afternoon nap.

For Asyiq Marzuqi Bin Abdullah, a 7-year-old student at MINDS – Fernvale Gardens School, having to board the school bus at 6.50am means getting up at 6am every morning, which is much earlier than his preschool mornings. His mother, Mdm Syafiqah Binte Mohd Suhaimi, shared that she had to bring forward his bedtime in the evenings so he could be better-rested for school the next day. Asyiq goes to bed early so he is ready for an early start to the school day.

SAMS shares with parents that practising school routines at home even before the children start school can help them feel comfortable with new routines; it also helps parents to pre-empt potential challenges and manage them. Some examples of routines include eating from a lunch box, walking to the bus pick-up point, and following a visual timetable at home.

The transition to SPED school is not always an easy or a smooth one – do encourage your child at each step, even the small ones.

For Jaeden’s parents, his first bus ride home was an especially remarkable milestone. Not only was Jaeden proud of himself for having ridden on his own, he looked forward to the next trip! As his mother Ms Ng says, “We always acknowledge these little victories to encourage him to push forward and try his best! We highlight how proud we are of him and that no matter what change happens, we are always cheering him on.” Jaeden alighting from the school bus after a day at school.

For Tiara, when she gets home from school, her brother, 15, and sister, 12, would shower her with affection while Madam Rabiah cooks chicken macaroni, her favourite dish, like a reward for attending school. 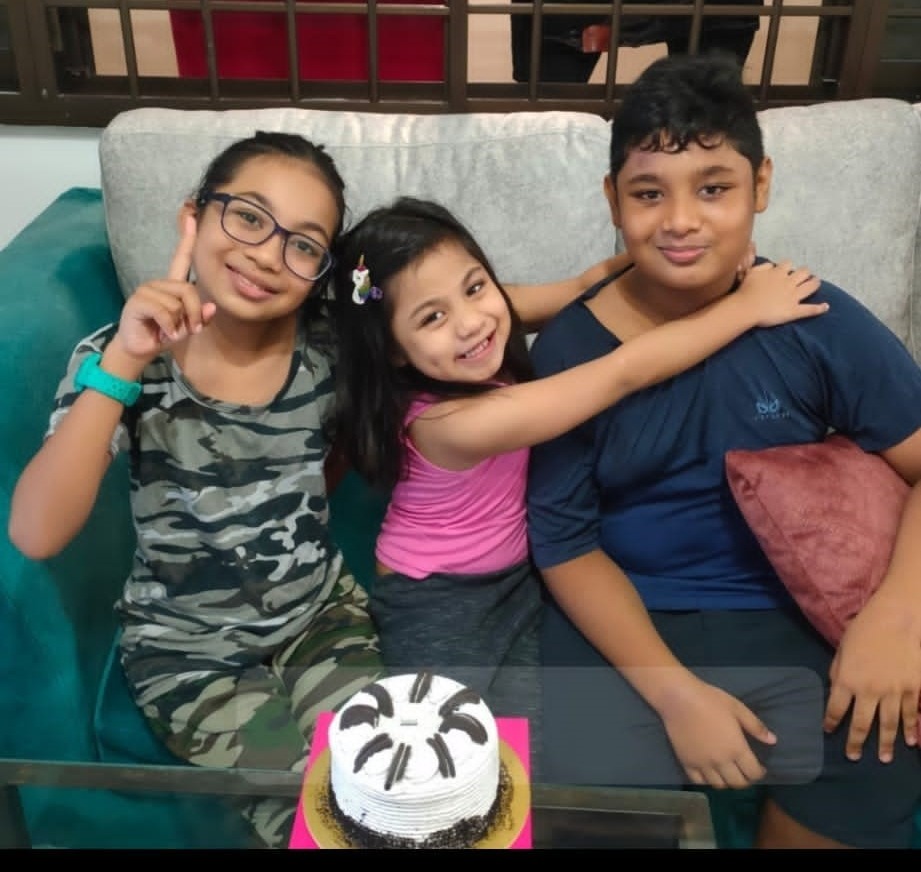 Tiara gets plenty of encouragement from her siblings for attending school.

Constantly affirm your child for their effort and celebrate every little success in their journey of starting school!