The number of students arriving in Australia in October this year was 43.6% lower than pre-Covid figures for the same month in 2019, new data from the Australian Bureau of Statistics has shown.

Viggo has previously worked in teaching in Germany and Turkey, until his change of career in 2017. He returned to the UK and completed a diploma with PA Training in London. In his free time he is normally watching a film or tv, or riding his bike, or reading… generally things that involve sitting. Get in touch with Viggo on viggo@thepienews.com.

Historically, up to 25% of student visa-holders transitioned to a permanent visa within six years of first commencing study in Australia, but for more recent cohorts that has halved to just 12%

Earlier this year, the 49,340 international student arrivals to Australia was a 73.2% decrease compared to February 2019 figures.

“We can be proud of this progress, but we have work to do to return to the position of strength we held before the pandemic,” Universities Australia chief executive Catriona Jackson said.

“We also know that return patterns are not even across the sector, with some universities finding returns slower.”

Jackson pointed to the “enormous” social, cultural and economic contribution international students make, including the $41 billion in exports education generated before Covid-19.

“International students also strengthen the communities they join in Australia, enhancing our social fabric and adding new skills and knowledge to our economy,” she added.

“We look forward to contributing to the government’s migration review to shape the way we attract and retain the best people to contribute to Australia’s economic, social and cultural prosperity.”

Writing in Campus Morning Mail, Dirk Mulder said after September data showed Chinese enrolments down 31% on 2019 figures and commencements down 44%, “things could be about to improve”.

With changes expected to flights from China and mandatory quarantine, there are signs from the Civil Aviation Administration of China that it will more than double international passenger flights between October and late-March, on the same period a year ago.

“This is all good news. Flight arrivals are currently at around 5% of what they were three years ago for point-to-point travel,” he wrote.

The migration review, announced in September, will look into “unlocking the potential of all migrants”, streamlining visa processes to make them internationally competitive, as well as sponsorship opportunities for emerging jobs and industries.

The document – submitted to the migration system inquiry – called for permanent skilled visas to be targeted at younger skilled talent to “allow them to stay in Australia long term, not to address short-term skills shortages”.

The report noted that temporary migrant numbers fell significantly during the pandemic, “but is recovering quickly as students, skilled workers and working holiday makers return to Australia”. 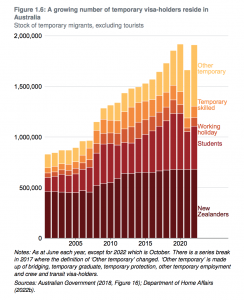 “Thanks to this faster-than-expected recovery in temporary migrants, net overseas migration in the October 2022 Budget was forecast to recover to pre-pandemic trends two years earlier than was forecast in the March 2022 Budget,” it said. 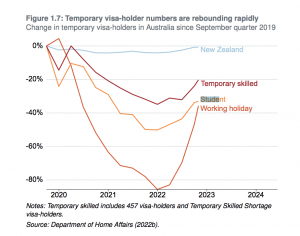 It stated that, historically, up to 25% of student visa-holders transitioned to a permanent visa within six years of first commencing study in Australia, but for more recent cohorts that has halved to just 12%.

“The decline in the share of international students transitioning to permanent residency reflects – at least in part – the decision taken in 2010 to decouple student visas from permanent skill visas,” the report said.

“Under the new policy, graduating students were offered a new Temporary Graduate visa, which provides students with the opportunity to gain work experience before applying for permanent residency. But again, the growing number of international students and recent graduates, combined with fewer permanent visas allocated via the points-test, resulted in intense competition for permanent skilled visas among international students.” 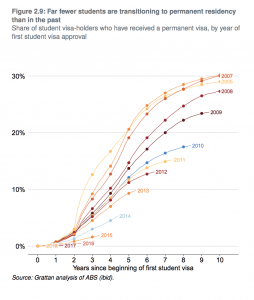 It calls for a thorough examination of the Genuine Temporary Entrant Requirement students need to submit when applying for visas, a new “coordinated” international education framework – including a renewed call to introduce an Australian Commissioner for International Education, as well as extended post-study work opportunities for skills training students.

It also requests a renewed focus on international students’ socio-cultural benefits and more transparency around agent fees for students.

The first findings from the migration review are expected in February 2023.