The results of the 2022 Duolingo Language Report show solidarity with Ukraine through language learning, with a global spike of over 1.3 million people picking up the Ukrainian language.

Kim graduated with a degree in French, Journalism and Creative Writing from the University of Strathclyde in Glasgow. She spent her year abroad in Paris, France as part of the Erasmus Exchange Program where she worked as an English Language Assistant for the British Council and has since championed student mobility and cultural exchanges. Kim tries to visit France as much as possible to practise her French and she loves all things to do with French culture, particularly literature and music.

According to the report, this was the most significant trend of 2022 for the language learning app, as interest in Ukrainian “soared” in the weeks after the Russia’s invasion of Ukraine began, with numbers in peaking in late March 2022 and remaining steady for the rest of the year. 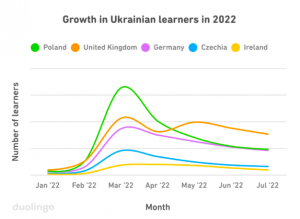 In 2022, Ukrainian was the 15th most popular language to study in Germany, compared with 2021 when it was the 36th most popular. Similarly, Ukrainian climbed the rankings for learners in the UK from 37th place in 2021 to 17th in 2022.

In 2022, it was not only in countries geographically near to the war where people chose to start learning Ukrainian. In the US, the language rose from 36th in the 2021 language ranking to 22nd in 2022.

One Duolingo learner, Nicole, works at a Pittsburgh-based organisation that works to improve the lives of refugees and immigrants by matching them with locals to support them in their transition. She shared her reasons for learning Ukrainian through the app.

“For me, it’s more of a respect thing for my potential clients. We have families coming here who don’t speak English, and are already going through a very intense transition. And the very least that I can possibly do is make an attempt to learn their language as well” she said.

The report also provided insights into the language learning habits of Ukrainians. German became the second most popular language to study in Germany in 2022 and the report suggests this could be due to the high numbers of Ukrainians who were displaced and subsequently resettled in Germany.

Record numbers of Ukrainians took the Duolingo English Test, with Ukrainian test takers increasing by 4000% year-over-year, as a result of displaced students seeking to continue their education elsewhere.

Other key findings of the report showed that English, Spanish, and French were the most popular languages studied globally, followed by German, Japanese, Italian, Korean, Chinese, Russian and Hindi, completing the top 10. 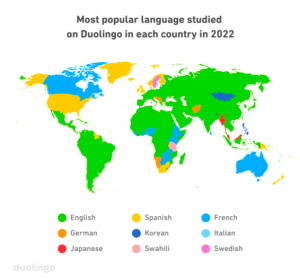 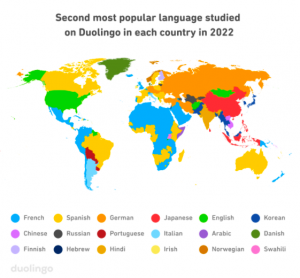 According to the report, “Although the most popular languages held strong this year, there’s evidence that learner interests are continuing to diversify year after year.”

The report states that the countries with the most serious learners were Japan, Belarus, Hungary, Russia, and Czech Republic as these locations had the highest average time spent learning across all learners.